When we talk about Mexico, the first thing we think of are tacos and without a doubt the Tacos al Pastor are the best known and the most delicious.

The manner of cooking and serving these tacos is unique, the meat is cooked on a spit and then shaved or cut from it at the point of serving. Spit-style cooking of taco meat is not commonly found outside of Mexico, and the counter-intuitiveness of placing pineapple atop a taco makes it the most elusive taco, causing many to confuse it with similar yet distinct dishes.

The cooking method using a spit is similar to the way gyro or shawarma is prepared. It is believed that the al pastor style was developed due to influence from Lebanese immigrants to Mexico. Over time, the method of preparing meat has morphed from something similar to Lebanese shawarma into the style that can be found today in taco restaurants all over Mexico. 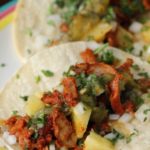 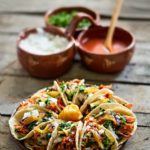 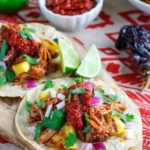