Loltún “means” flower of stone “, Mayan word that owes its origin to have found drawings of flowers on the walls of this huge passage, although other theories claim that its name is due to the sounds that emit the stone columns: “Lol” y “Tun”.

It was a place of human settlements of the year 9,000 a.C. until 1050 AD; examples of this are ceramic objects, stone tools, sea shells, cave paintings and petroglyphs. Here is clay, which was extracted by its inhabitants to make various tools and was also used as the source of drinking water of the place, as there are no cenotes or bodies of fresh water nearby.

Apparently, it was also home to local animals such as bison, mammoths, horses, various felines, deer and a series of mammals now extinct, becoming a site of botanical and zoological interest, as well as aesthetic;
currently only iguanas, bats and some birds live in it. Although it ceased to be a place inhabited in the Classic period (300-1050 AD), several years later, in the 19th century, war conflicts emerged called the Caste War and it was again used as a refuge by rebellious Maya.

Up to now, 9 entries have been found in the grottos of Loltún; the caves cover approximately 20 hectares and currently the Nahcab and Loltún entrances are used (as entry and exit).

The tour of the grotto is approximately one kilometer and begins with a bas-relief known as “Guerrero de Loltún” which represents a character with richly dressed Olmec features and wielding a spear. There is also a calendrical date that corresponds to the year 500 a.C.

Once inside, along the route, you can see cave paintings of a human head with Olmec features, a plume and other ornaments: hands, animal faces, frets and inscriptions. 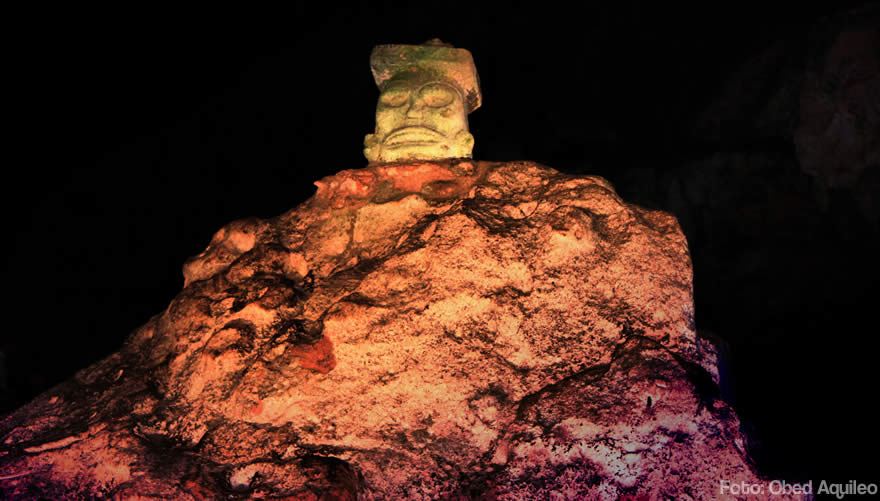