Holy Week has a particular form of celebration in every corner of the world. The historical processions in different countries and this is how they celebrate:

Spain: celebrates with the exit to the street of manifestations of faith, called processions, usually organized by a brotherhood. In each procession of Holy Week may be one or more brotherhoods, each with its step or steps, which are usually religious images of the Passion of Christ, or Marian images, although there are exceptions such as allegorical steps or those of saints. Also they appear the penitentes or nazarenos with their corresponding badges.

Perú: begins with the procession of the Lord of Agony, the Sorrowful Virgin, Veronica and St. John.

Saturday of passion, the staging of the passion of Christ takes place.

Palm Sunday, the Christ comes out on a donkey, the flames carry dried broom that will be burned on the Sunday of resurrection .On Monday the procession leaves the Lord of the garden, on Tuesday the Lord of the Sentence, Wednesday the meeting between Christ, his mother and Mary Magdalene is represented and on Thursday the churches are visited.

On Holy Friday the procession of the saint Selpulcro and the Saturday of glory, is the Passover and the festival is celebrated in all its splendor. The fair reaches its maximum in the Cerrito de Acuchimay.

Sunday of Resurrection, the most important procession. They carry the Christ on a litter, lit by candles and the broom is burned. While people dance and sing around in the square. In addition, one of the most celebrated dishes is the patasca or patashca accompanied by some chaplas.

El Salvador: it is about the “Talgucines”, they are part of an ancient tradition of Holy Week in Texistepeque, El Salvador. During the festivities, the “Talgucines” lash out against the Catholic faithful to cleanse their sins. In addition to the masked devils, people also participate in their  celebrations disguised as priests in Texistepequ

Egypt in the streets of so many Andalusian cities. In the case of Jerez, throughout the week, the streets are full of people who go out to see and accompany the steps of mystery or pallium steps, loaded by 40 or 50 men, carrying images that are supposed to be those of Jesus and Mary. 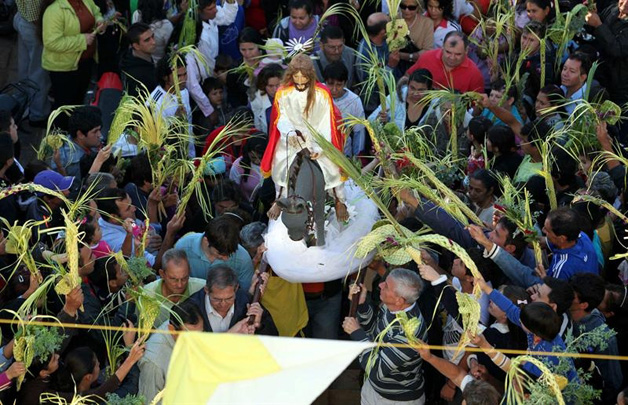