Bacalar is simply a paradisiacal town that makes you fall in love with its small fishing houses and places to know, such as:

It is a huge expanse of shallow water, with very soft white sand. It presents a slight wave of barely perceptible blue tones where the composition of the crystals present generates a simply fascinating spectacle.

This lagoon is part of a lagoon system approximately 55 kilometers long that communicates with the Chetumal bay through the Hondo River and the Chaac estuary. Along the way, some hotels and private residences have been built, which are usually crowded on weekends and holidays.

The Fort of San Felipe, built in 1729 (eighteenth century); It has remained as an example of the military architecture of New Spain, since it avoided the incursions of pirates and filibusters, as well as witnessing innumerable and historic battles against the English, who sought to control the trade of dye stick and other precious woods existing in the region; at that time he had a drawbridge and a pit which, instead of water, contained pointed stakes for defense. Today, the moat is a beautiful garden with Mayan and Spanish designs in which you can see machetes, rifles, cannonballs and rattlesnake tails, which have a deep meaning in the Mayan religion.

In the fort is currently the Museum of San Felipe de Bacalar, which, although small, tells in a general way the historical development of the area through certificates, maps and drawings that show the visitor how the boats arrived at the lagoon.

ts liquid mantle, which connects with Lake Bacalar, has a special charm. With a depth of 90 m .. it gets its name due to the turquoise color of its waters.

It is an outstanding site for diving, because even without a spectacular visibility, it offers intricate labyrinths of interlaced and overlapping roots and trunks, hollows of various sizes and rock formations on its walls with vertical and negative inclinations, with a background that remains hidden from the distance (more than 90m deep); has caves that invite to be penetrated, provided that you have expert guides and adequate training.

This house dating from the nineteenth century, was rebuilt by the government of the State and inaugurated by the President of the Republic in July 1990. Currently offer workshops for people of all ages, such as: Folk Dance, Poetry Choral and Theatrical, Crafts, English, and Danzón. 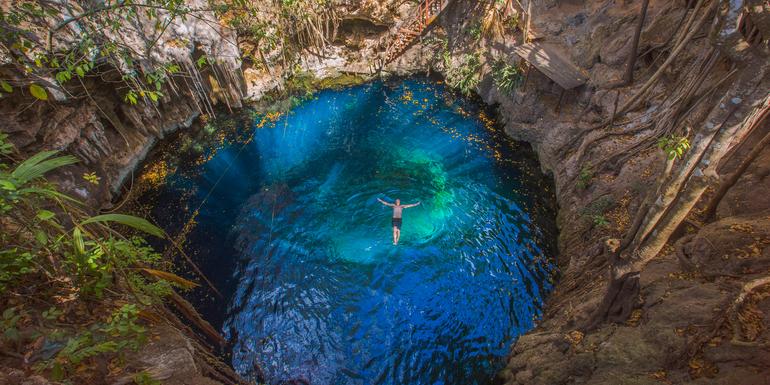